See the latest pics and videos! In 1981, Donruss and Fleer gave Topps some much-needed competition. Having earned the right to produce baseball cards in a court case with Topps, the 1981 Donruss set became the company’s first baseball offering.  There were tons of errors, collation inside boxes was hit and miss (mostly miss) and the cards were printed on a cheap, thin stock that sometimes stuck together.  While it left a lot to be desired in terms of production, it does have a certain nostalgia to it 35 years in the rear view mirror.  Here are five underrated 1981 Donruss cards.

The 1981 Donruss set has more than its fair share of mistakes and variations. But the two Pete Rose No. 131 cards are worth a look. The card is one of several Rose cards in this set and Donruss did their best to point collectors to the others. There are actually two different versions of Card No. 131. One ends with directing collectors to Rose’s No. 251 card while the other points to the Hit King’s No. 371 card. Neither is an error since those are both legitimate Rose cards in the set. At only $1 or $2 for each example, both are affordable and relatively easy to find.

Each year, there is a strong push to get Raines into the Baseball Hall of Fame. While he has come close, he hasn’t yet been able to get over the hump. Raines is one of the top base-stealers of all-time but his contributions to the game go beyond that. He was a seven-time All-Star, won a batting title, and twice led the league in runs. Raines will have a decent shot to earn election this year as he got onto nearly 70% of ballots (75% is needed) last year. At only about $1, his card is already a bargain. It will be an even bigger steal, however, if he finally gets the call to Cooperstown.

Henderson has only one truly recognized rookie card in the 1980 Topps set. But his 1981 Donruss card is significant since it’s not only a second-year card, but his first Donruss edition. Henderson’s card is among the more expensive in the set, but ungraded examples are easy to find in the $2-$3 range. His credentials hardly need recounted, but as a Hall of Famer and possibly the greatest leadoff hitter of all-time, at that price, his card is undervalued.

Thirty-five years later, it remains one of the quirkiest 1980s baseball cards. Ainge’s rookie cards were found in both the Fleer and Donruss sets in ’81.  Of course, Ainge would become famous; just not in baseball.

Despite only being taken in the 15th round of the 1977 MLB Draft by Toronto, Ainge shot up through the Blue Jays’ system, needing less than two years to debut in the majors’ in 1979 at the age of 20. His major-league career was hardly stellar and Ainge was out of baseball only two years later – ironically, the year his rookie card hit the streets. But his sports career was just getting started as he went on to star in the NBA. Ainge made it clear his decision to ditch baseball in favor of basketball was the right move. He made an All-Star team and w

on two championships with the Boston Celtics. His card can be found for $1 or less on eBay.

Mookie Wilson will always be remembered for his hit in the 1986 World Series, which Bill Buckner botched, allowing the Mets to reach a Game 7 and ultimately defeat the Boston Red Sox. Wilson’s career, however, was far more than that one moment. He enjoyed a 12-year career, stealing more than 300 bases and leading the league in double plays for a center fielder on three different occasions.

In ’81, he was becoming a fan favorite on a Joe Torre-managed Mets team that needed a few. Two game-winning homers later in the season didn’t hurt his popularity.

The baseball card landscape changed in 1981 when both Donruss and Fleer entered the marketplace and put an end to a Topps monopoly. While 1981 Donruss Baseball is far from a perfect set, it's place in hobby history is important.

On the surface, the 1981 Donruss Baseball checklist is large but simple. Factor in the many error variations and you've got something a little more challenging for completists. The main set has a total of 605 cards -- 600 player cards and five unnumbered checklists. That's significantly smaller than the 726 cards of 1981 Topps Baseball, but still on the big side.

Outside of Tim Raines, there aren't any major rookie cards in 1981 Donruss Baseball. From there, rookies drop off to players like Mookie Wilson and Jeff Reardon. One of the more intriguing cards in the set features a player who would go on to have a stellar basketball career instead, Danny Ainge.

The card design is fairly simple on the front. White around the outside, photos are framed in with a thick color frame with an inset black. The Donruss logo and year are in the top and the team name is on the bottom. Backs are more intricate. They're headlined by the notation, "First Edition Collector Series." The Donruss logo is flanked by bats, balls and ribbons that help frame in the timeline-style bio and stats. 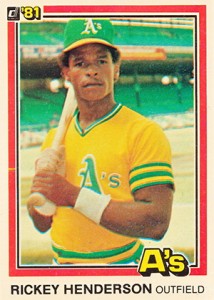 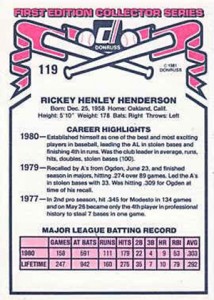 1981 Donruss Baseball has more than 30 cards that have variations. Most of these are errors from the set's first run that were corrected. None command a huge premium like some of the errors that would dominate the hobby a few years later.